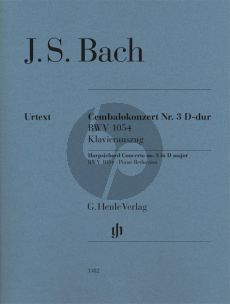 It is almost impossible to tell from listening to them that Bach’s extremely popular concerti for harpsichord were probably his own transcriptions of solo concerti which had originally been composed for violin or a woodwind instrument. While in many cases the original model is unknown, this is not true in the case of the D major Concerto BWV 1054, which was written in 1738 as an arrangement of the E major Violin Concerto BWV 1042. Once again Bach succeeds in conjuring a brilliant and idiomatic keyboard work from the violin part. Not only because of this, but also principally due to its lively and cheerful outer movements, BWV 1054 belongs among the highlights of Bach’s rich compositional output. The piano reduction comprises the solo part together with a very playable piano reduction prepared by Johannes Umbreit for practical use.