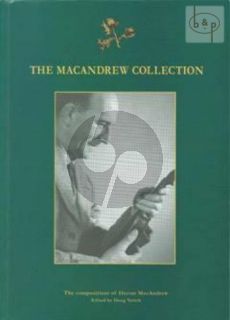 Earn 2,750 Poppels with this product

The genuine Scottish fiddler has an infallible sense of rhythm, never plays out of tune and is a master of his distinctive and inimitable style. Those words of Yehudi Menuin sum up the unique qualities in the playing of Hector MacAndrew, without question a master, perhaps the greatest Scottish fiddle player of the 20th century.

Hector MacAndrew (1903 -1980) was born at The Cottages, Fyvie Castle, Aberdeenshire, in 1903. His father, Peter, was a fiddler and a piper. Peter was born in Moulin in Perthshire and in the early 1890s moved up to Fyvie Castle where he was gardener and piper to Lord Leith. This Perthshire connection links the family back to Niel Gow. The tunes and talents of Hector MacAndrew are justifiably well-known. His dedication to the Scots fiddle, its tunes and technique, was recognised when he hosted Yehudi Menuhin at Blair Castle in 1974 and gave him a televised lesson in the Scots fiddle style. MacAndrew was taught by his father, whose own father was taught by a pupil of Neil Gow's. MacAndrew taught the superb Douglas Lawrence, and Lawrence taught Paul Anderson, who plays MacAndrew's tunes on the CD The MacAndrew Collection which is also available to accompany the book.

This book is Hector MacAndrew's compositions in their entirety. The tunes cover a wide range of genres including slow strathspeys, pipe reels, pipe marches and more from one of the most revered fiddle players Scotland has produced. This collection of his compositions was arranged and published by his son Pat.