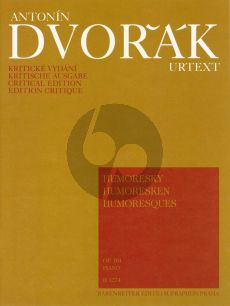 During his stay in America (September 1892 – April 1895), Dvorák filled his sketchbooks with thematic concepts, many of which he used soon after in the compositions he created there; others he retained unused. In the summer of 1894 he interrupted his American stay and spent most of the holidays at his favourite retreat in the village of Vysoká u Príbrame. In his moments of rest in his beloved Czech countryside, the composer was struck with the idea to create a number of trifles for piano, and for these he used some of the thematic material from his recent two-year stay over the ocean. Thus began the cycle, which he only later called “Humoresques”, and which was published by Simrock immediately in the autumn of 1894. The seventh Humoresque was soon published in arrangements for all kinds of instruments, and became one of his most popular pieces ever. The publication is part of the first Complete Critical Edition of the Works of Antonín Dvorák.