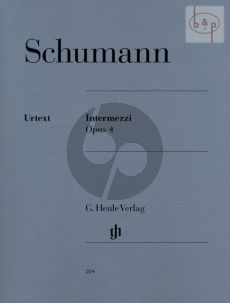 Encouraged by the success of his 'Papillons', Schumann composed his 'Intermezzi' op. 4, also known as 'longer Papillons', in 1832. Despite the at times improvisatory style, Schumann worked very carefully on this composition, 'The Intermezzi are going to be something special - each note is going to be weighed up carefully'. The fact that Schumann was very preoccupied with counterpoint at the time cannot be missed. Bach's influence can be especially felt in numbers 1 and 5, something that contemporary critics greatly appreciated. This edition has been revised in Schumann's anniversary year to reflect the latest scholarly findings. An extensive source critical text has also been included.