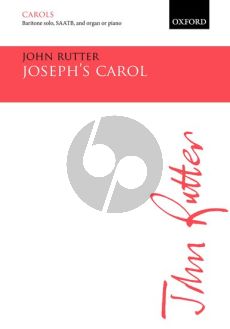 Earn 150 Poppels with this product

Dedicated to the Oxford Vaccine Team and premiered by Sir Bryn Terfel, The Oxford Philharmonic Orchestra, and the Choir of Merton College in a special tribute concert, Joseph's Carol sets words by the composer that recount the Christmas story from the perspective of Joseph.

The two expressive verses are taken by the solo baritone, with the chorus performing a macaronic refrain infused with expectancy and wonder, as well as taking on the role of the angels in a soft accompaniment to the closing words of the second solo verse.

The upper three voice parts are designed to be approximately equal in strength, and the carol may be accompanied by organ, piano, or small orchestra. The orchestral accompaniment is available for purchase.