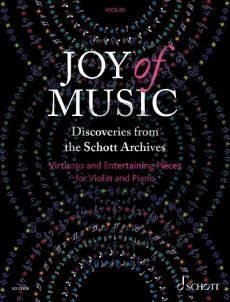 To mark the 250th anniversary of Schott Music, these treasures have been uncovered from the archives, reedited and presented in these beautiful editions. This anthology is aimed at intermediate to advanced violinists looking for some interesting new discoveries away from the standard repertoire.

Containing works largely from the Romantic era, these are virtuoso pièces de résistance and encores, expressive character pieces, gems of salon music and elaborate arrangements of well-known melodies and themes. Many of the original compositions and arrangements were written by major instrumentalists of the 19th century. 148 pages.