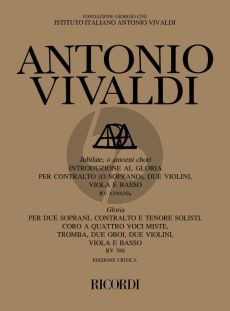 Earn 3,000 Poppels with this product

RV 588 is Vivaldi’s ‘other’ Gloria, a composition having many parallels with Vivaldi’s better-known setting of the same text (RV 589). It dates similarly from the period 1713-1717, when the composer was acting choirmaster at the Ospedale della Pietà in Venice. It even borrows from the same work, a slightly earlier Gloria by the Venetian amateur composer Giovanni Maria Ruggieri, for its closing fugue. However, the present Gloria, RV 588, departs from its more famous counterpart in ingeniously combining its opening movement with the final movement of a specially designed introductory motet, Jubilate o amoeni chori (RV 639/639a), for solo contralto (or soprano) and strings, although Vivaldi makes it possible, through optional cuts indicated in the autograph manuscript in Turin, to perform the Gloria alone. With or without its Introduzione, RV 588 is a masterly work with many memorable moments, not least in its heartfelt second movement set to the words “Et in terra pax”. The Introduction and Critical Commentary for this vocal score prepared by Antonio Frigé are closely based on those of the Critical Edition by Denis Arnold and Michael Talbot, published in 1990.