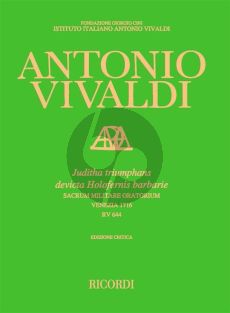 Earn 1,750 Poppels with this product

Deservedly, Juditha triumphans, RV 644, remains the best known and most highly esteemed of all Vivaldi's large-scale vocal works, apart from his Gloria, RV 589. Sadly, it is the only one among VivaldiÆs four known oratorios to survive. Its musical richness - expressed most conspicuously by its colorful instrumentation but no less evident in its melodic and harmonic invention - is arguably unsurpassed in the whole of his oeuvre. Its dramatic qualities, both textual and musical, are of a kind more immediately appreciated by modern audiences than those of his operas. In short, it is a masterpiece.