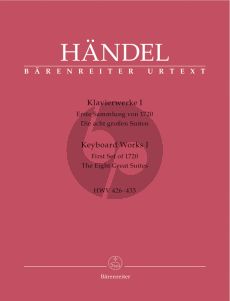 Throughout his life Handel was famous as a brilliant performer on keyboard instruments, and he began composing for them in his youth: his early training under Zachow included the study of the most important 17th-century German composers for the keyboard, and their influence can be seen in the harpsichord music which he had written by the time he left Hamburg for Italy in 1706. He seems to have taken it up again only after he settled in England in 1712, and during the next few years he wrote a large number of harpsichord works, with a peak about 1717, when he was becoming involved with the music at Cannons.

Apparently Handel was in no hurry to publish these compositions, and manuscript copies were made for friends and patrons. The primary source for our text is the third impression of the Cluer edition. As well as the Walsh, le Cène and Leclerc editions there are important manuscript sources, including some autographs, which give much additional information concerning the text.