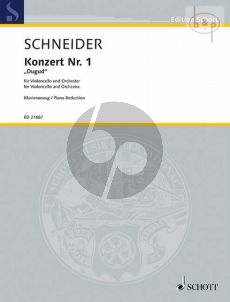 Enjott Schneider's Concerto for violoncello takes up the Sumerian legend of the bird deity 'Dugud' in archaic scenes. Legend has it that Princess Emeshe was impregnated by the hermaphrodite - half eagle, half falcon - in a dream and founded with her son ┴lmos, who had thus been conceived, the royal Hungarian dynasty. In expressive musical pictures, Schneider describes the dark-erotic struggle of impregnation as well as the chant of the unborn. Hovering above everything is the vision of life in complete freedom like a bird. The work was premiered by the Hungarian cellist László Fenyö in 2011. Thanks to the piano score written by the composer, the work can now also be studied and performed by a duo. Advanced. 68 pages.