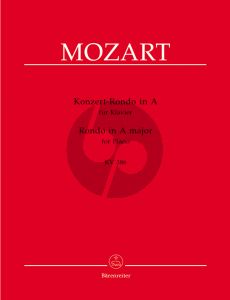 The manuscript of Mozart’s Rondo for piano and orchestra has an incredible history. The almost complete autograph score was sold page by page at auction in London during the 1830s. Some of the pages auctioned off were even ripped in half. Not surprisingly, the original was scattered to all corners of the globe and is now incomplete. Today large sections of Mozart’s handwritten score have resurfaced, but large gaps still remain. The only source that contains the entire work is an arrangement for solo piano by the composer Cipriani Potter (1792-1871). He produced his arrangement before the auction took place and published it in 1838 with the added remark: “Arranged from the original score in the author's own hand writing.” A comparison with the end of the Rondo, which resurfaced only a few years ago, reveals the extent of Potter’s interventions. Our new performing edition of Potter’s original print reproduces this ending as an optional alternative while also drawing on the fragments of Mozart’s autograph. We also print a cadenza suggested by the editor since no cadenza by Mozart has survived for this work. Potter’s arrangement preserves the extraordinarily beautiful sound quality of Mozart’s original for performances without orchestra. Our volume makes this important source available once again to performing musicians. - A major Mozart document made available once again to performers - Scholarly-critical edition that compares Potter’s arrangement with Mozart’s manuscript fragment for the first time - A welcome addition to the concert repertoire for piano - Preface in English and German