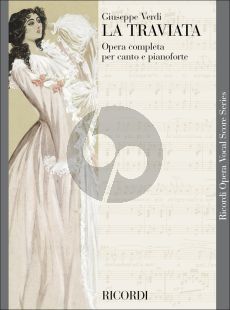 The hidden sadness and frustration of living as a moral outcast, the attempt to simulate innocence in frivolous living and the desperate search for relief from pain and anguish, the destruction of all hope in an unrealistic love affair... this is Violetta Valery. Verdi penetrated the tormented sensitivity of her soul as he visualized her in his music, transforming her individual fate into a universal representation of human suffering. His compassion for her, however, met with bigoted censure: the bourgeois public, scandalized by the presence of a kept woman as a character on the stage, gave the opera an icy reception at its premiere in Venice (Teatro La Fenice, 6 March 183). Certainly an inferior cast for the occasion did little to help. Only the following year, when La traviata was revived for another production in Venice (Teatro San Benedetto), did the tale of Violetta manage to overcome this prejudice and win the unconditional esteem it so deserves.