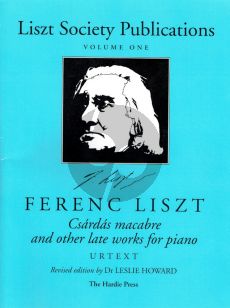 This edition contains many of the extraordinary piano works of Liszt’s last years, when he famously ‘threw his lance into the future’ and anticipated the music of many of his much later successors.

The volume was first published in 1952 under the title Late Piano Works, but now is newly engraved and expanded with several additions from original Liszt manuscripts. ‘Sospiri!’, the 5th piece in Fünf Klavierstücke für Olga Meyendorff, was not included in the 1952 edition, having only first appeared in 1963.

The whole volume has been scrupulously revised with reference to the best manuscript and published sources to produce an accurate Urtext.