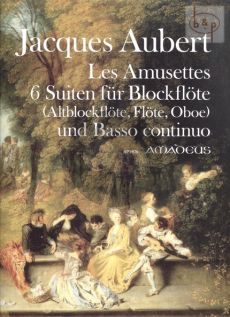 Jacques Aubert was born in Paris on 30 September 1689 into an affluent and music-loving family. His father Jean was one of the 'Vingt-quatre violons du Roy'. The famous violinist Senaillé, also a member of the royal orchestra, was Jacques' teacher. There are no accounts of his activity prior to his employment by the Prince de Condé in 1719, whose private orchestra he conducted. 1719 saw the first delivery of his Sonates à violon seul et Basse continue op. 1, followed by four further series, op. 2-5, up to 1738. Aubert took advantage of the festivities the prince organized in Chantilly in 1722 for the boy king Louis XV to attract attention to his works La Fête royale divertissement and Le Ballet des vingt-quatre heures. In 1725 his comedy La Reine des Péris was performed at the opera. In 1727 he entered service at court, working full time as concertmaster of the opera from 1728 to 1752. For a decade he also performed as a soloist in the Concerts spirituels, for the first time to great acclaim with his own works. In 1746 he managed to have his ballet Fêstes champestres et guerières, masterly choreographed, performed at the opera. Aubert is important for being the first French composer to develop, in his 12 Suites de concerts de Symphonies, early forms of symphonic music, by adding wind instruments to the Italian concerto genre with its four violins above a bass (without viola). Jacques Aubert retired to Belleville, where he died on 18 May 1753. While Aubert's operas and ballets, very much of his era, are no longer considered, a historic look at his instrumental works is definitely worthwhile. The wealth of melodic ideas in his 6 Concerti op.17 (of 1734) and 4 Concerti op. 26 (1739) for 4 violins, cello and b.c., for instance, have a sequential diction which announces early classical forms. Aubert did not forget the musical 'salon' either, as can be seen from 'Les petits concerts' op.16, and from the present nobly graceful and playful 'Les Amusettes', first published in 1733 and titled: LES / AMUZETTES / PIECES / Pour les Vielles, Muzettes, / Violons, Flûtes, et Hautbois. / PAR MR. AUBERT / Ordinnaire de la Chambre du Roy et de l'Academie Royale, / Intendant de la Musique de / S. A. S. Monseigneur le Duc. / Gravé par Mm. e Leclair. / Oeuvres XIVe. / prix en blanc 3t.t 12f. / A PARIS / Chez L'auteur, Le Sr. Boivin, Le Sr. Leclerc. Laid out in score form, this opus is carefully furnished with articulations and ornaments, though without signs of expression. The Basso part, on the other hand, is richly figured. We have translated the characteristic little 'recreation' titles into German and English.