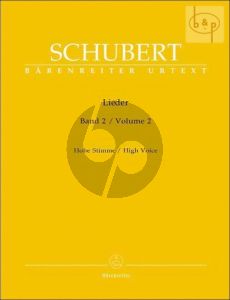 Walther Dürr , one of the world's most distinguished Schubert scholars, now continues his new Urtext edition of Schubert's lieder with the second volume for high, medium, and low voice, adding forty-six further lieder with the definitive texts from the 'New Schubert Edition' and the composer's original groupings. The volume contains not only such well-known lieder as Die Forelle and Der Alpenjäger , but two of Schubert's smaller song cycles: the Mignon Lieder from Goethe's Wilhelm Meister and the songs from Sir Walter Scott's Lady of the Lake. Especially useful to performers are the alternative versions reproduced for several of the lieder, allowing seemingly familiar works to appear in a new light. The edition also takes the practical side of music-making into account. The larger size of its volumes guarantees a spacious and uncluttered appearance on the page. A detailed preface by Walther Dürr recounts the genesis and transmission of each lied and outlines its source materials.