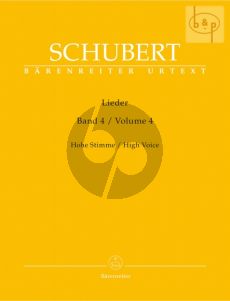 Walther Dürr, one of the best-known Schubert scholars, has now edited the fourth volume of songs for high, medium and low voices as a continuation of the new Urtext edition of Schubert Lieder. This contains both the last books of lieder which Schubert himself saw into print together with individual lieder. These were printed during Schubert's lifetime in littleknown sources, in periodicals and almanacs, but were not included by him in lieder volumes or published as works with their own opus number, together with lieder listed in the Deutsch catalogue as "undated" (D 990A to D 990C). They were mostly written between 1826 and 1828.The best-known settings in this volume are probably the fourteen lieder D 957 and D 965A drawn together as Schwanengesang to poems by Ludwig Rellstab, Heinrich Heine and "Die Taubenpost" by Johann Gabriel Seidl,. As this was Schubert's last major composition, the collection, posthumously published by Haslinger at the beginning of May 1829, later acquired the name Schwanengesang, the name traditionally given to an artist's last work.