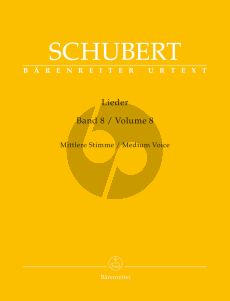 Walther Dürr presents Volume 8 of the new Urtext edition of Schubert’s lieder in separate editions for high, medium and low voice. This volume contains lieder originating during the latter half of 1815, between August and November. Three series of lieder, each based on a particular poet, immediately catch the eye: a number of Ossian settings, a group of Klopstock lieder and finally another set on texts that Schubert found in a Viennese almanac (Selam). Furthermore, the series of Schubert lieder on texts by the North German poet Ludwig Theobul Kosegarten which starts in Volume 7, is concluded in this volume. • Based on the Urtext of the “New Schubert Edition” • Clear and uncluttered engraving • Foreword by Walther Dürr on the genesis and history of the work as well as an explanation of the sources for each individual lied (Ger/ Eng) • Includes English translations of the lieder texts by Richard Wigmore