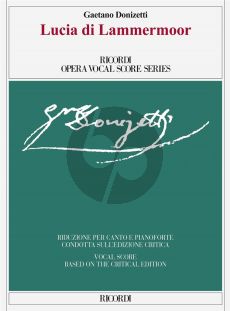 Gaetano Donizetti’s Lucia di Lammermoor, written to a libretto by Salvadore Cammarano, was first performed at the Teatro di San Carlo in Naples on September 26th, 1835. It has remained in the repertory without interruption as one of Donizetti’s most popular operas throughout its nearly 200-year history. The edition proposes as the principal text a version of the opera that, for the most part, is as near as possible to that given at the premiere in Naples.

The critical edition restores the original keys, thus maintaining Donizetti’s overall harmonic design, but discusses transpositions that later entered the performing and editorial tradition of the opera. What is presented here is the reduction for voice and piano.