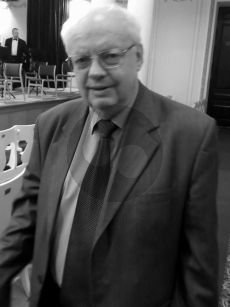 The Ukrainian composer Myroslav Skoryk was born in Lviv in 1938. He graduated from the Lviv Conservatory as a composer and musicologist, and studied at the graduate school of the Moscow Conservatory in the class taught by Dmitry Kabalevsky. Skoryk was a professor at the Mykola Lysenko Lviv National Music Academy and the P.I. Tchaikovsky National Music Academy of Ukraine, and served as head of the composition department and the history of Ukranian music. He taught and has influenced many famous Ukranian composers such as Yevhen Stankovych, Ivan Karabits, Oleh Kyva, Volodymyr Zubitsky and Viktor Stepurko, among many others. For many years, he was secretary of the Ukrainian and USSR Union of Composers. Skoryk was a professor and member of the Academy of Arts of Ukraine, he held the title of People’s Artist of Ukraine and was awarded the Taras Shevchenko National Prize of Ukraine. He was granted the titles of Chevalier of the Order of Merit and Hero of Ukraine.