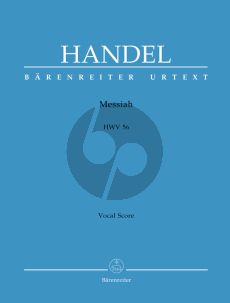 “Messiah“ occupies a unique position in Handel’s work. Its strongly universal character and directness of expression, which appeal to men of all creeds, make it the most renowned work in the whole of the composer’s monumental output.

Passion, cantata, opera, instrumental music – that is, all the important musical genres of the time – these formed the basis of Handel’s new art-form, which developed with ever increasing impetus from the end of 1738 onwards and found a particularly complex realization in “Messiah“.

It is often been said that Handel composed “Messiah” for his visit in Ireland, wither he had been onvited by the Lord Lieutenant, William Cavendish, Duke of Devonshire, to perform his music for the benefit of charity. The first performance took place on 13 April 1742 in Neale’s Music Hall, Dublin. After Handel’s return from Ireland “Messiah” received fifty-six performances in England during his lifetime.

What makes the revised vocal score so special?

- The vocal score has been newly engraved with a generous layout.
- The pagination has been adopted from the previous edition. This means that you can rehearse and perform this work with some singers using this new edition and some the old Bärenreiter edition.
- This new vocal score includes a revised piano reduction: The old Schneider piano reduction has been maintained, but corrected and uncluttered; on the whole the new piano reduction is easier to read and to play.
- The vocal score is fully compatible with all existing performance material (BA04012).
- The text appears in a slightly larger type size.
- Apart from corrections the musical text remains unchanged.