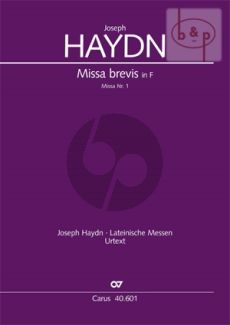 Despite all of its folk-line simplicity of melody, Haydn's first mass contains a pious note that, just like its youthful verve, still was to hold fascination for him in his late years when, in 1805, he re-orchestrated his first work. The first version of the mass is considered to have been composed in 1749 or 1750. It was around the same time that Pope Benedict XIV treated questions concerning church music in his encyclical 'Annus qui' in which he condemned the frequently operatic style of church music and demanded liturgical music that revealed an awareness of its religious purpose and that sought to fulfill it with simple means of musical expression. In its liturgical attitude Haydn's first mass is anchorded in this point of view (that to a great extent corresponded to the general standpoint of the churches of the eighteenth century). Year of release: 1749 -50 (?) (dazwischen) Scoring: Soli SS, Coro SATB, 2 Vl, Vc/Cb, Org Language: Latin. Key: F major Duration: 14 min.