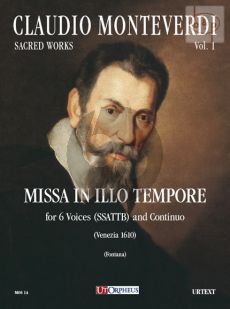 The corpus of sacred works by Claudio Monteverdi (Cremona, 1567 - Venice, 1643) first appeared with the Sacrae Cantiunculae tribus vocibus Liber Primus (1582) and the Madrigali Spirituali a quattro voci (1583; of this latter collection only the bass partbook is extant). These works date back to Monteverdi's so-called Cremonese period (until 1590), when he was receiving his training under maestro Marcantonio Ingegneri, a fact acknowledged on the title pages of both collections. Monteverdi's years in Mantua (1561-1612) produced the Missa da Capella a sei voci, fatta sopra il motetto In illo tempore del Gomberti, published in Venice by Ricciardo Amadino, and the Vespro della Beata Vergine da concerto, composto sopra canti fermi. The Mass and the Vespers, both dedicated to the Borghese pope Paolo V, were united into a single publication in order to celebrate with solemnity, breadth and variety the festivities of the Virgin Mary. The volume presented an original juxtaposition of the two musical idioms known as the prima and seconda prattica. Monteverdi's last two sacred collections date to his years in Venice, from 1613 to his death, when he held the post of maestro di cappella at St. Mark's Basilica, and was thus responsible for music throughout the Venetian Republic. They are the Selva Morale e Spiritualeà dedicata alla Sacra Cesarea Maestà dell'imperatrice Eleonora Gonzaga, Venice, Bartolomeo Magni, 1640 (which also contains a Messa a 4 da capella), and the Messa a 4 voci et Salmi a 1, 2, 3, 4, 5, 6, 7 & 8 voci concertati e parte da Capella, & con le Letanie della B. V.à dedicati al R. mo P. D. Odoardo Baranardi, published posthumously by Alessandro Vincenti, again in Venice in 1650. Monteverdi's sacred production also includes about thirty compositions printed in various anthologies.