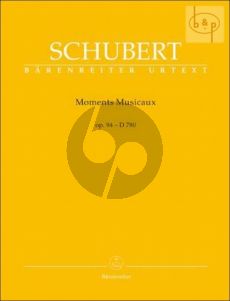 Schubert's well-known collection of Moments Musicaux was published in 1828, during the last year of the composer's life, but some of the pieces date back to the beginning of the 1820s. In 1823 he published his extremely popular Air russe, which later became the third piece of the Moments Musicaux and during the following year the chordal sixth piece entitled Plaintes d'un Troubadour. The multi-faceted lyrical atmospheric pieces are particularly suitable for piano teaching because of their charming variety as well as their moderate technical demands. They have become an indispensable part of the concert repertoire.

A detailed foreword, suggestions for performance and notes on the evaluation of the primary sources complete the edition.

Mario Aschauer
studied piano, historical keyboard instruments, conducting and musicology in Linz, Salzburg and Vienna. He performs as a soloist and chamber musician, with groups including the Austrian Calamus Consort, presenting a wide-ranging repertoire on fortepiano, harpsichord and organ.