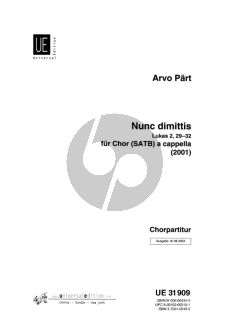 Nunc dimittis, also known as Simeon’s canticle, is taken from the New Testament (Luke II, 29-32); it is a short paean which Simeon took up when, as promised by the Holy Spirit, he was allowed to see the Messiah in the temple of Jerusalem before his demise. Pärt set the Nunc dimittis for a cappella chorus on commission from St. Mary’s Cathedral, which has one of Scotland’s great church choirs. Along with the Magnificat, Nunc dimittis is at the centre of the Anglican Mass, the Evensong, and it is a component of many vesper services. Luke 2, 29-32 29 Nunc dimittis servum tuum, Domine, secundum verbum tuum in pace, 30 quia viderunt oculi mei salutare tuum, 31 quod parasti ante faciem omnium populorum, 32 lumen ad revelationem gentium et gloriam plebis tuae Israel.