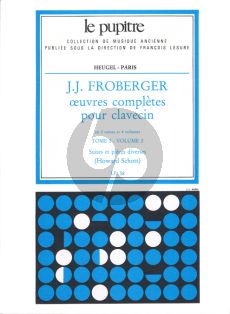 Earn 2,200 Poppels with this product

Second volume of the second tome and fourth book of the Complete Harpsichord Work by Johann Jakob Froberger, this volume is a set of twenty-five pieces for Harpsichord. Edited by Howard Schott, the book has its preface and information in French, English and German. It features eighteen suites numbered from Suite XIII to Suite XXX, as well as seven other works, including three guigues and four other pieces. The works are of medium difficulty and can be played by intermediate players. Johann Jakob Froberger (1616-1667) is a German Baroque composer. He was a famous musician among his peers and influenced many of them.