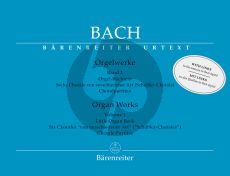 Volume 1 of Bach’s organ music presents some of the most frequently played organ pieces altogether. Here they appear in a new engraving based on the New Bach Edition (NBA). This updated edition takes into account the latest findings of Bach scholarship: Thus, for example, a newly-discovered copy of the first edition containing inscriptions in Bach’s own hand could be incorporated into the musical text of the Schübler Chorales. For the Orgel-Büchlein, Bach’s autograph manuscript remains the principal source. Yet a glance at its early dissemination among his pupils reveals an abundance of readings that give interested organists insights into how perhaps Bach’s most famous collection was played at that time. Unfortunately no autograph manuscripts survive regarding the early chorale partitas. However the Foreword helps to solve the ‘riddle’ of how these partitas were handed down. Links to major sources have been provided in collaboration with the Bach Archive Leipzig and its Bach digital database. The relevant page of the source in question can be accessed quickly and conveniently via shortlinks at http://links.baerenreiter.com. These links are checked for their validity on a regular basis. - Complete new engraving - New detailed Foreword by Christine Blanken (Ger/Eng) - Links to relevant sources in Bach digital