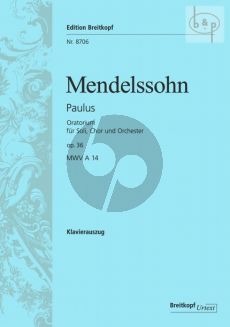 By forgoing the version transmitted by Julius Rietz (1878), on which all later reprintings were based, in favor of the score of the first edition of 1835, which was personally supervised by the composer, a new Paulus has come to light: freed from a number of conventionalizing, adulterating retouchings, at times more angular in detail and thus more characteristic. (Michael Märker about his New Edition, 1997)