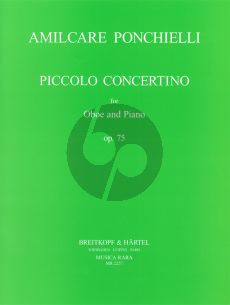 Lovers of opera and ballet are familiar with the name of Amilcare Ponchielli. "La Gioconda," premiered in 1876 and revised several times afterwards, rapidly brought the composer international fame which, however, was later surpassed by his pupils Mascagni and Puccini. Among Ponchielli's many instrumental works, his oboe pieces deserve particular attention. His friendship with the oboist Cesare Confalonieri gave rise to two works for oboe and piano: the present "Piccolo Concertino" op. 75 and the "Capriccio" (MR 2288).