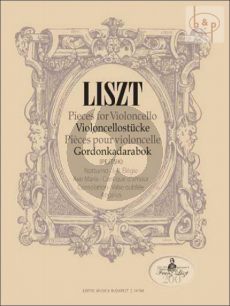 Not many people know that Ferenc Liszt arranged some of his piano pieces for the cello, with piano accompaniment, and this version of the works appeared in print during the maestro's lifetime. Arpád Pejtsik selected two of these for this volume compiled to mark Liszt's jubilee: Elegies I and II. The other compositions by Liszt that appear in the collection were likewise originally works for piano: the Ave Maria and Cantique d'amour (pieces from the Harmonies poétiques et religieuses cycle) were transcribed by a pupil of Liszt, Robert Pflughaupt; the cello version, transposed into G major, of the E major Consolation is by Jules de Swert, solo cellist in the Weimar orchestra of those days; that of the Angelus (the opening piece in Volume 3 of the cycle entitled Years of Pilgrimage) is by Lothar Windsperger, a German composer who lived at the turn of the 19th-20th century.