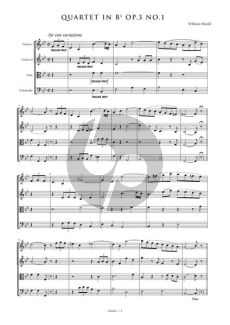 The Op.3 quartets were written with a string player's grasp of textural matters, particularly in the phrasing and articulation of themes and the transparency of parts which offers rewarding activity to each individual player.

Shield's goal in the quartets seems primarily one of enrichment, of gaining the most from a single or small number of ideas. A striking example is the Finale of Op.3 No.2 where a recurring theme generates developmental episodes; even more, the theme itself is presented in turn by the first violin, second violin and viola. Movements such as this map the geography of Shield's popular bucolic operas where the countryside and home cottage signify symbolic sites of sanctuary. Here, the pastorale theme with hurdy-gurdy-like accompaniment - possibly patterned on the overture to Arnold's popular rustic opera The Agreeable Surprise (1781) - serves to release hunting-horns - not unlike the Squire's 'echoing horn' in Arne's Thomas and Sally (1760), folk-dance and lark-song in successive episodes before closing off rumi natively.

The last quartet in C minor is the most progressive. The unified impulse which sweeps across all of its three movements, allied to a wealth of material interconnections, as well as the strength of feeling it communicates, must have been surprising to first hearers. The music of the opening Allegro manages to fold characteristic sonorities and proportions that will define the behaviour of the whole work and, once again, there is a cross-generic influence of English comic opera; here, the forward thrust released into dislocating effects and outbursts, represents the expressiveness of stage encounter. The tender middle movement suggests painful soliloquy and the first violin's written-out cadenzas easily associate with soaring soprano coloratura. The Finale, employing folk-like material (Shield collected folksong) pricked by C minor-major regretfulness, further underlines the nurturing English landscape motif as a source of regeneration.

The present work was published by William Napier in 1782 under the inspection of Shield himself. No autograph score survives and Napier's printing, a copy of which is preserved in the Bodleian Library, Oxford, under the call number Mus 177c.69, is the only source of this edition. The title-page, which mistakenly prints 'flute' for 'oboe' reads: Six / QUARTETTOS / five for two / Violins a Tenor & Violoncello / and one for a / Flute, Violin Tenor, / and / VIOLONCELLO / Composed & humbly dedicated to the / Right honorable / LORD KINNAIRD / by / William Shield. / Op.III. [swelled rule] Pr. 10:6 / Printed for Wm Napier No 474 Strand.

This edition presents as faithfully as possible the intentions of this source. The style and notation of articulation and dynamic markings have been standardised throughout and, where missing, markings have been reconstructed from parallel passages. The notation of appoggiature has also been standardised to minimize confusion. Obvious wrong notes have been corrected without comment; editorial emendations with no authority from the source are placed within brackets.