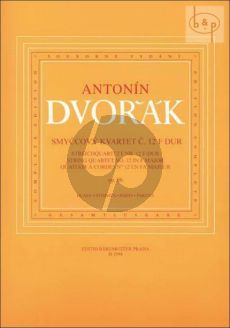 Of the works which Antonin Dvorak wrote during his three-year sojourn in America, the String Quartet in F major ('American') is the best known after the New World Symphony. It was written essentially without interruption during the course of June 1893 and reflects happy times spent in the hamlet of Spillville over the summer holidays among Czech compatriots, descendants of Czech immigrants, where the composer, surrounded by nature and friends, had the ideal conditions for his composition work. The use of elements of American folk and popularised music gives the piece its typical character. This set is part of the first Complete Critical Editionof Works by Antonin Dvorak.