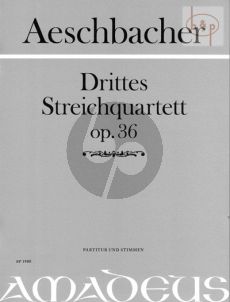 Walther Aeschbacher was born on 2nd October 1901 in Berne, where he attended primary and scientific secondary school. He then studied mathematics, chemistry, physics and musicology at the university, while taking violoncello, piano and harmony at the conservatory. In 1921 he entered the Music Academy in Munich, which gave him the opportunity of attending university lectures by Wölfflin and Röntgen. He graduated from the academy as capellmeister and composer in 1924. Back in Switzerland, there followed further studies with Felix Weingartner in Basle (1929/30). After a spell as music critic and gifted teacher, Aeschbacher devoted himself entirely to conducting (choir and orchestra). For over 30 years he conducted oratorio performances and symphony concerts in many Swiss cities. His works were performed at musical and song festivals in Switzerland and abroad and broadcast by many Swiss, German and Italian radio stations. He died on the 6th of December 1969. As a composer, Walther Aeschbacher cultivated nearly all musical genres with the exception of opera. His works reveal his consistent rejection of avantgardist experiments and show his preference for strict, often linear forms combined with a wealth of melodic invention. Besides works for a cappella choir, written mainly for his personal use, orchestral cantatas and wind music, his instrumental oeuvre is now being rediscovered and admired for its archaic style and great melodic strength and beauty. It includes a Symphonie in D, the Symphony for strings op. 50, the 'Veronese Elegy' for strings and gives pride of place to chamber music, with 3 string quartets, threeand four-part cello suites, 2 string trios and numerous duos. The String quartet in E flat major op. 36 is a fine example of Aeschbacher's preference for the strict forms of inventiones and fugue. Throughout his life the linear style remained his personal means of expression, albeit enriched by harmonic and instrumental skills.