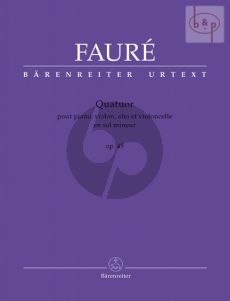 Earn 2,750 Poppels with this product

Faures chamber music is dominated by ensembles with piano. In fact, only one work excludes it: the string quartet of 1924 written when he was 79, Faure's final chamber composition. In addition to the numerous works for piano and soloist including violin and cello sonatas and a treasure trove of precious miniatures mirroring his gift for song, Fauré wrote two piano quartets, two piano quintets and a piano trio, all of them superb works of the highest order. The Piano Quartet No. 1 in c minor, Op. 15 begins the series of larger ensemble works. Written in 1883 (with a revised finale substituted the following year), it falls neatly between the music of César Franck and Ravel suggesting appropriate and revealing comparisons. Fauré had a very distinct musical personality, somewhat aloof from the intoxication of Wagner as well as the modern leanings of the Impressionists. Yet his music is unmistakably French with a strong kinship to both the suave Romanticism of Franck and the cool sensuality of Debussy. As especially demonstrated in this piano quartet, a remarkable lineage seems to flow across this span of time and compatriot composers that evolved a most distinctive school of French art at the end of the 19th century. It is particularly compelling to realize that Faure's first piano quartet predates Debussy and Ravel's first mature works by ten and twenty years respectively. Along with the traditional clarity, poetry and restraint of the French tradition preceding it, Fauré's music sounds refreshingly and presciently modern. The quartet's first movement amply illustrates many of these qualities. The sonata's two primary themes establish wonderful contrasts. The first is heavy-handed and robust with immediate pointers to Franck and Debussy's first quartet. Through a supple series of transformations, the theme enjoys chameleon-like changes of character and mood as both Franck and Debussy did within and across movements with a typical French penchant for cyclic form and subtle permutations. Faure's second theme is lyrical and winsome, flowing in ribbons of step-wise sequences that became a signature texture throughout much of his oeuvre. Here is both the essence of Faure's counterpoint and his subtle technique of development through nuanced modulation of a near minimalism of material. Delicate, elusive, ever flowing and shimmering, this kind of ingenious musical continuity flows straight into music of Ravel, Faure's most famous student. Fauré's Scherzo is fascinating. It moves throughout with the dual personality of a march and a waltz with a steady perpetual motion gently animating the entire construction. It suggests phrases such as "watch-like precision" often given to key French composers like Saint-Saens and Ravel. The steady "groove" is based on a combination of an obstinate bass pattern (the pizzicato strings or the piano's left hand) and a scurrying melodic figure (in the piano's right hand or the bowed strings). Over time, the strings introduce a much more languid melody that stretches with a certain wryness like gauzy fabric over a loom. This is one part of the casual, playful humor of Faure's Scherzo. The other is the trio: it is surprisingly similar to the Scherzo musically, but it begins on the dominant and seems to invert aspects of the bass, melody and texture for an inside-out and upside-down effect. Running through the fabric are wisps and threads of musical lines that fly off in the treble range and a merry dotted rhythm that skips and prances through the precision clockwork, all in a very suave, scherzando musical entertainment. The adagio is majestic and profound, serene with a dark streak of poignancy. It opens with an elegiac theme, a stately pavane measured, reflective and somewhat grave. It gathers momentum, reaching with a more emphatic yearning that relaxes again into pastels and a dreamy nostalgia like a French café song whose languorous melancholy savors its own sorrow fondly. A dour chord wakens the reverie into a disorienting drift back through the spinning of time in wide ranging piano arpeggios; a recollection of the poised elegy sinks deeply into the lower strings under the terrible weight of reality. The piano continues to dream, lost, floating skyward like a brightly colored kite against the gray clouds, forever untethered from the gravity of the dark earth below. Fauré concludes his first chamber work for large ensemble with a blustery, restless rhythmic tour de force that begins with a storm in a minor key and travels, moto perpetuo, a wide arc of kaleidoscopic changes to end in a surge of bright triumph, a sparkling finish awash in color and grand cadences. The magnificent swell and sweep of the finale carries in its wake a whole history of styles, textures and moods. Here one finds the Romantic heft of Franck waltzing with the pointillism of Ravel, the big orchestral rainbows from Iberian tributes of earlier Frenchman amidst the intimate, ripe lyricism characteristic of all great chamber music. And for the distinctive sound of the piano quartet itself, one finds the surging, precisely unified rhythms in gigantic strides that are idiomatic to the great modern pianoforte as well as the glittering melodic lines high and impossibly delicate in the right hand, those that Mozart first set against the velvety, long lines of a tremulous and harmonically complete string trio, the definitive colorful textures of the earliest great piano quartets.