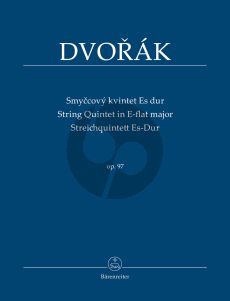 The String Quintet in E-flat major op. 97 (with two violas) is the third work Dvorák composed during his stay in America. “This quintet may be said in three of its movements to show the influence of American life and American music upon the composer” wrote the American music critic Henry Krehbiel on 7 January 1894. The use of particular melodic and rhythmic elements in his American compositions, as typically found in Afro-American gospels, strengthened the gathering conception considering Dvorák to be the founder of an American national style of music. The String Quintet in E-flat major was premiered on 12 January 1894 at the Carnegie Hall and was published shortly afterwards in score and parts by Simrock. This first edition is the main source for this publication. - Reprint from the “Complete Edition of the Works of Antonín Dvorák”, Vol. IV/8 - New foreword (Cz/Eng/Ger) by David Beveridge with an evaluation of the origin of the composition