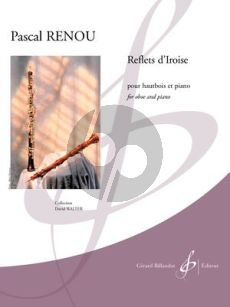 Reflets d’Iroise consists of one movement alternating slow and fast tempi (like a condensed sonata form) on limited
transposition modes and semitones as harmonic entities (without being dodecaphonic). It is a dialogue between the
oboe (the sailor) and the piano (the sea).

The Iroise Sea is part of the Atlantic Ocean. It is contained in the South East part of the Celtic Sea and stretches West
of Brittany, between the Channel (Île Vierge islet) and the Bay of Biscay (Point Penmarc’h).

Known for its treacherous reefs, narrow passages and strong tidal currents, it is one of the mot dangerous seas in
Europe.

The piece describes the contrasts of light and shadow and the changing moods of the sea. Pounding octaves evoke the
lashing of the waves at the Raz of the île de Sein.