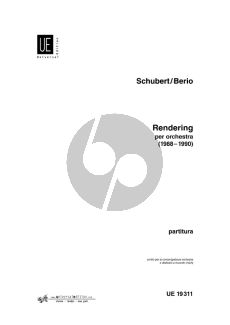 Earn 5,000 Poppels with this product

Luciano Berios “Ricomposizione” provide new angles on old material – perhaps the most successful is Rendering, based on motifs and material by Franz Schubert. It was written in 1988/9 for the Concertgebouworkest in Amsterdam and premièred there under the direction of Nikolaus Harnoncourt.

Berio on his work on Rendering:

During the last few weeks of his life, Franz Schubert created many sketches in preparation for a Tenth Symphony in D major (D 936 A). These sketches are fairly complex and of great beauty: they add a further indication of the new paths that were taking Schubert away from Beethoven's influence. Rendering with its dual authorship is intended as a restoration of these sketches, it is not a completion nor a reconstruction. This restoration is made along the lines of the modern restoration of frescoes that aims at reviving the old colours without however trying to disguise the damage that time has caused, often leaving inevitable empty patches in the composition (for instance as in the case of Giotto in Assisi).

As it can be seen, the sketches as left by Schubert in an almost pianistic form bear occasional instrumental indications, but are at times almost written in shorthand and had to be completed above all in the internal and bass parts. The orchestration follows that of the Unfinished, and whilst the obvious Schubert colour has been preserved there are brief episodes in the musical development which seem to lean towards Mendelssohn and the orchestration naturally reflects this. Furthermore the expressive climate of the second movement is stunning: it seems inhabited by Mahler's spirit.

In the empty places between one sketch and the next there is a kind of connective tissue which is constantly different and changing, always “pianissimo” and “distant”, intermingled with reminiscences of late Schubert (the Piano Sonata in B flat, the Piano Trio in B flat etc.) and crossed by polyphonic textures based on fragments of the same sketches. This musical “cement” comments on the discontinuities and the gaps that exist between one sketch and another and is always announced by the sound of a celesta, and must be performed “quasi senza suono” and without expression.

During his last days Schubert took lessons in counterpoint, manuscript paper was expensive and it was perhaps for this reason that amongst the sketches for the Tenth Symphony there is a brief and elementary counterpoint exercise (a canon in contrary motion). This too has been orchestrated and integrated into the Andante.

The final Allegro is equally impressive and certainly the most polyphonic orchestral movement Schubert ever wrote. These last sketches, although very fragmentary, are of great homogeneity and they show Schubert in the process of testing different contrapuntal possibilities for one and the same thematic material. These sketches alternatively present the character of a Scherzo and a Finale. This ambiguity (which Schubert would have solved or exasperated in some new way) was of particular interest and the “cement-work” here aims amongst other things at making that ambiguity structurally expressive.