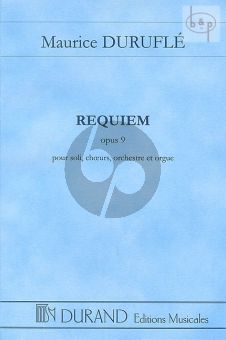 Earn 4,150 Poppels with this product

The Requiem, op. 9, by Maurice Duruflé was commissioned in 1947 by the French music publisher Durand and is written in memory of the composer's father. The work is for SATB choir with mezzo-soprano and baritone soloists. It exists in three orchestrations: one for organ alone, one for organ with string orchestra and optional trumpets, harp and timpani, and one for organ and full orchestra. At the time of commission, Duruflé was working on an organ suite using themes from Gregorian chants. He incorporated his sketches for that work into the Requiem, which uses numerous themes from the Gregorian 'Mass for the Dead.' Nearly all the thematic material in the work comes from chant. The work is set in nine movements. Like many requiems, Duruflé's omits the Gradual and the Tract. The Dies irae text, perhaps the most famous portion of the Requiem mass, is not set (although the first words of the Dies irae are included in the Libera me.) Duruflé's omission of this text and inclusion of others (Pie Jesu, Libera me, In Paradisum, from the burial service, mirroring Fauré), makes the composition calmer and more meditative than some other settings. In the full score, the fifth movement, Pie Jesu, has the only solo for the mezzo-soprano; in addition, even in the 'organ-only' version of the Requiem, there is an obbligato cello solo. The baritone soloist has parts in the third movement, Domine Jesu Christe, and the penultimate movement, Libera me. Duruflé left indications in the score that, for the baritone soloist at least, it was preferable to have the choir sing the solos instead. This has resulted in various forces being used in different performances, some with both soloists, some with only the mezzo-soprano, and some (such as Robert Shaw's Telarc recording) using no soloists at all.