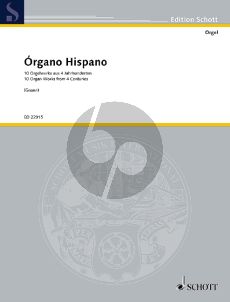 New Music on old instruments and new organ literature in dialogue with historical Iberian works. The present edition contains a collection of works, composed for an authentically rebuilt historical Spanish organ and covering a wide range of styles, which adds new sounds to the purely Baroque repertoire. With works by José Blasco de Nebra, Francisco Correa de Arauxo, Antonio de Cabezón, Pedro de Araujo, and new compositions by Guy Bovet, Michael Kapsner, Pavel Klimashevsky, Zsigmond Szathmáry and Alfred Müller-Kranich. The new Spanish organ of the Hochschule für Musik Mainz as an authentically rebuilt historical instrument from the workshop of the organ builder Joaquín Lois from Tordesillas in Castile shall both adequately reproduce early music and be a source of inspiration for contemporary music. For this reason, the Hochschule für Musik Mainz commissioned five composers to write modern compositions according to the motto 'Early music in dialogue with New Music' which are a valuable addition to the repertoire of historical instruments of the 'Siglo de Oro'. Certain specifications had to be taken into account: e. g. a limited pitch range, half stops for treble and bass registers, the short octave as well as a mean-tone temperament. In addition, each composition is based on a work of the Iberian organ literature; sometimes, the work found its way into the new composition, sometimes, it only served as an inspiration. The pieces can also be played on a modern organ, although there is a special charm in playing and hearing them played on an appropriate historical instrument. Encompassing a broad range of styles, the resulting collection adds new sounds to the purely Baroque repertoire. 76 pages. Intermediate to advanced level.