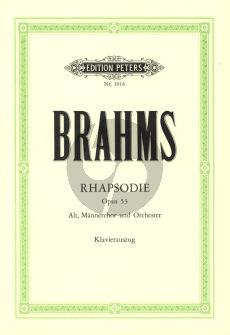 The Alto Rhapsody, Op 53, is a work for contralto, male chorus, and orchestra by Johannes Brahms. It was written in 1869, as a wedding gift for Robert and Clara Schumann's daughter, Julie. Brahms scholars have long speculated that the composer may have had romantic feelings for Julie, which he may have integrated into the text and music of the Alto Rhapsody. The text, with its metaphysical portrayal of a misanthropic soul who is urged to find spiritual sustenance and throw off the shackles of his suffering, has powerful parallels in Brahms's life and character.

The Rhapsody is a setting of verses from Johann Wolfgang von Goethe's Harzreise im Winter. The work is in three sections: the first two, in a chromatically dense and wandering C minor, are for the soloist and orchestra and describe the pain of the misanthropic wanderer. The second section is an aria in all but name. The third section, in a nominal C major, brings in the male chorus, which joins the soloist in a plea to a celestial spirit for an abatement of the wanderer's pain. The third part of the Rhapsody has similarities of vocal and choral style to A German Requiem, which was written the previous year. The work typically takes between twelve and fifteen minutes in performance.

The work was first 'tried out' on 6 October 1869, at the dress rehearsal for the Karlsruhe season's first orchestral subscription concert. Amalia Boni sang the solo role; the conductor Hermann Levi was on hand, but there was no male voice chorus, and it is unclear whether Boni was accompanied by orchestra or simply on piano. Brahms and Clara Schumann were present, but there was certainly no other audience. It received its first public performance, and its first definitely known proper performance, on 3 March 1870, at Jena. The soloist at the first performance was Pauline Viardot and the conductor was Ernst Naumann.