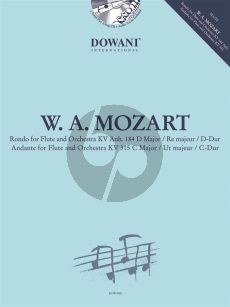 Flute with Cd or Audio

Dowani 3 Tempi Play Along is an effective and time-tested method of practicing that offers more than conventional play-along editions. Dowani 3 Tempi Play Along enables you to learn a work systematically and with accompaniment at different tempi. The first thing you hear on the CD is the concert version in a first-class recording with solo instrument and orchestral, continuo, or piano accompaniment. Then the piano or harpsichord accompaniment follows in slow and medium tempo for practice purposes with the solo instrument heard softly in the background at a slow tempo. Finally, you can play at the original tempo to the accompaniment of an orchestra, piano, or basso continuo. All versions appearing on the CD were recorded live by renowned soloists, accompanists, and orchestras. There are no synthesised sounds in a Dowani edition!

In this edition, we present two shorter works by Wolfgang Amadeus Mozart, which were not originally intended as a continuous work, but which are ideally suited to such a performance, especially as they complement one another in character so beautifully. The edition allows you to work through the piece systematically and at different tempi with the accompaniment.
The enclosed CD begins with the concert version of each movement, following which you will hear the piano accompaniment at slow and medium tempo to help you practice. Having mastered these slower versions, you’ll now be ready to play with orchestral accompaniment at the original tempo. All of the versions were recorded live. The CD tracks are also available in downloadable MP3 format.

Flute with Cd or Audio