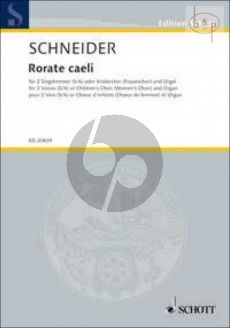 Enjott Schneider, professor of music theory and film composition at the Munich Academy of Music, is one of the most versatile composers of our time. His oeuvre ranges from classical choral and instrumental works via the opera to musicals and film music. At the age of 19, Schneider got his first job as an organist and has since felt connected to church music as well. His work Rorate caeli is based on the Gregorian responsory of the same name. Originating in the 17th century, this chant was handed down from France and is characterised by its fresh melody and simplicity. In this work, Schneider skilfully combines old and new elements of music. He sets the Gregorian chant as a canon, giving it a light and joyful character which is contrasted by a dark organ sound with a mystic undertone, heralding the great secret of Advent. An interesting work that expresses the joyful anticipation of, and the secrets of Christmas.