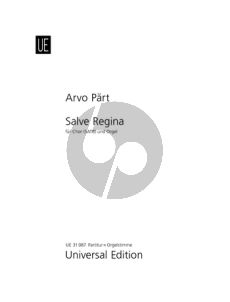 Like the Littlemore Tractus, Pärt's setting of the Salve Regina has an extended hymn-like feel to it. Typically, it builds very gradually to a late, majestic climax - unison vocal lines at the outset, broader harmonies later, some intriguing eccentricities in the organ part along the way. It was the wish of Hubert Luthe, Bishup of Essen Cathedral, that this particular text be set in honour of the building's priceless golden Madonna. The premiere was in May 2002, to mark both the Bishop's seventy-fifth birthday and Essen's own 1150th anniversary. (Meurig Bowen)