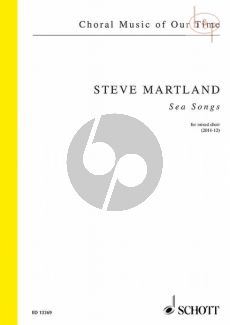 Sea Songs, commissioned jointly by Ars Nova Copenhagen and Glasgow Concert Halls, is a kind of sequel to Martland's Street Songs (originally written for the Kings Singers and Evelyn Glennie). As with the earlier piece, Martland made use of to the library of the English Folk Song and Dance Society at Cecil Sharp House in north London. 'I wanted specifically to find texts that were not just the usual nautical heave-ho sort of thing, but instead explored the dangers and hardships still being experienced by sailors as recently as the early 19th century. I was also very happy to see in these texts the sense of camaraderie and mutual support that existed between the sailors.' (Steve Martland) Dance to your Daddy sets the scene of a sailor's wife at home, dandling her baby son and singing to him about his daddy away fishing, and about the future. Both the tune and the words come from the Northumberland area around Newcastle. This song is very well known in the UK and gave the title to a famous television series When the boat comes in. Fire Down Below is about the effects of fire - a constant danger on board wooden ships. At the end of this song the words take on an extended meaning: Fire in our hearts for the friends that we love. The Dead Horse is about the initial month of work without pay in which all seamen had to take part. They referred to it as the 'dead horse' - hence the expression 'to flog a dead horse' when something is a waste of time. The seamen resented this unpaid time, and the text expresses their frustrations metaphorically by listing what they would do to the horse! The music's frantic gallop alludes to the horse's desperation. Although The Sea Martyrs presents itself as a ballad, this text has a more literary feel, and unlike the other songs it doesn't include a chorus refrain. It concerns the sailors' lack of pay, the consequences of asking for pay (being hanged!), and the poverty of their families at home. The poem portrays the sailors' deaths as an almost religious sacrifice to help future seamen. At the end of the work, the opening of Dance to your Daddy returns as a kind of descant, sung by an angel calling to the hanged men. ® Paul Hillier, 2012