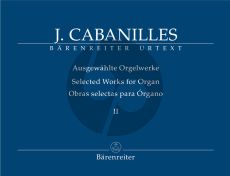 Although quite some time has passed since the multifaceted organ music from Spain's Golden Age could be called an “insider's tip”, it had yet to attain popularity with any wide audience outside the countries of the Iberian Peninsula. The three-volume Urtext edition of selected works by Joan Cabanilles, the cathedral organist from Valencia, now has every chance of becoming a milestone in its own right. The Iberian organ tradition of the 17th century appears to have reached its climax in his tientos, diferencias and versos. In the first two volumes, the editors Gerhard Doderer and Miguel Bernal Ripoll present a total of 22 of his most appealing and most significant tientos. - Urtext edition based on the latest research findings - Preface by the editors (in German, English and Spanish)