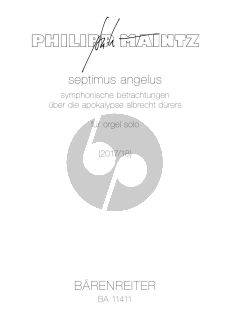 The doomsday visions of Albrecht Dürer’s woodcut series “Apocalypse with Pictures” have inspired many composers to create musical representations of the pictured events. With “septimus angelus“, Philipp Maintz follows in this tradition. However he abandons the pattern of a primarily pictorial reinterpretation of these artworks, concentrating instead on the wealth of their structural mysteries.

In the Foreword of the score, organist Bernhard Buttmann writes: “Both the organist and the audience are seen as subjects of the musical happening and become its focal point. Just as Dürer’s richness of detail will only reveal itself after lengthy, meditative observation, Philipp Maintz’ “septimus angelus” requires an unbiased, open-minded, and perpetually fresh listening process that should correspond to a colorful interpretation with an openness to new sound experiments. The performer faces the challenging task of incorporating a wealth of precious details into the musical development as a whole, while offering ever-changing ways of musical illumination from multiple perspectives.”