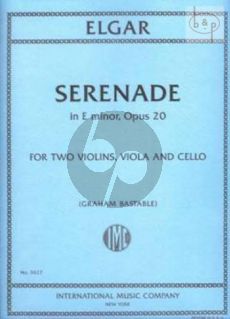 Earn 1,700 Poppels with this product

Well after Edward Elgar had written larger, more ambitious works such as Enigma Variations, The Dream of Gerontius and Cello Concerto, he considered his youthful Serenade for Strings, Opus 20 among his favorite works. Along with his Introduction and Allegro and Elegy, it remains as a staple in the string orchestra repertoire.

The Serenade is likely a reworking of an earlier work, Three Pieces for String Orchestra (Spring Song, Elegy and Finale). This was premiered in Worcester in May 1888, though the manuscript is lost. Elgar began composing the Serenade in March 31, 1892. The work was first performed in May by the Ladies' Orchestral Class in Worcester, England, with Elgar conducting.

The first movement begins with a dotted rhythmic motive in the viola and moves at a brisk but leisurely manner. The elegiac second movement displays the maturity and emotional intensity of Elgar's later works. The final movement retains the gentle, lilting rhythms of the first movement. Later he restates material from the first movement, ending with three tranquil E major chords.

For this new version for string quartet, I have mostly preserved Elgar's bowings, with a few adjustments to make it more idiomatic for chamber playing. In two places in the orchestral version, Elgar gives the melody to a solo violin. In the string quartet version, these two spots - in movement 1, measure 70 (Cello) and movement 3, measure 52 (Violin II) - are marked "[Solo]".