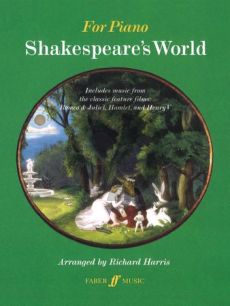 Shakespeare’s World present arrangements for piano of some of the greatest music inspired by the Bard. With fourteen exceptional pieces, this is a cornucopia of music by the great composers from the famous films (Branagh’s ‘Much Ado About Nothing’, ‘Henry V’ and ‘Hamlet’ together with William Walton’s outstanding score for Laurence Olivier’s original ‘Henry V’) alongside works by Tchaikovsky, Mendelssohn. Also includes pieces from Royal Shakespeare Company productions composed by Nigel Hess and Stephen Warbeck.