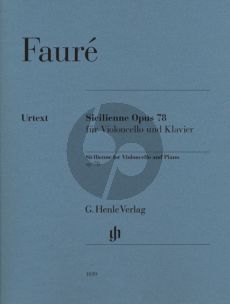 This composition for violoncello and piano in the style of a Sicilian dance is from Gabriel Fauré's middle creative period and was first published simultaneously in France and England in 1898, reflecting Fauré's increasing international popularity. The character piece with its memorable, expressive melody became increasingly popular after Fauré had included it in the Suite from his incidental music of Pelléas et Mélisande (in a version for orchestra) that was also premiered in 1898.