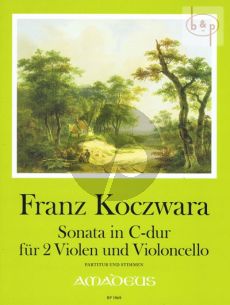 Franz Koczwara (FrantiÜek Koèvara) was born around 1740 in Prague. Hardly anything is known of his musical education. What is certain is that he was soon an acclaimed violinist. He spent the last years of his life in Flanders. Bibliographer Fétis reports meeting him as a youth: Koczwara was in the audience as Fétis performed Mozart sonatas. Together with Fétis and his father, Koczwara afterwards performed his celebrated Battle of Prague for piano trio. He then turned towards London, obtaining engagements at the King's Theatre and at the Ancient Concerts. At the end of the 1780s we find him in Ireland. We know that he played the viola in Gallini's orchestra at the King's Theatre. Returning to London around 1790, he took part in the commemorations for Handel. An oboist named Parke reported that he was successful with publishers not only with works of his own, but also for delivering works by Haydn, Pleyel and Mozart under his own name. His unsettled and dissipated life was cut short on 2nd September 1791 in London. Koczwara was an extraordinarily gifted composer and instrumentalist. He played not only the violin, viola, violoncello and double bass, but also the flute, oboe and bassoon. Besides the programmatic Battle of Prague, reprinted up to 30 times, he wrote symphonies, sonatas for harpsichord and for violin, and refined chamber music, partly in unusual combinations, as this edition reveals. The print of the parts appeared c. 1775, titled : 'Six / S O N ATA S / Three for a / Violin, German-Flute, & Violoncello: / Two for two / VIOLINS and VIOLONCELLO, / and One for two TENORS & VIOLONCELLO, / with / Accompaniments for two Horns / Composed by / Fr. Koczwara. / LONDON / Printed and sold by C and S Thompson.' The accompanying horn parts referred to seem not to have survived.