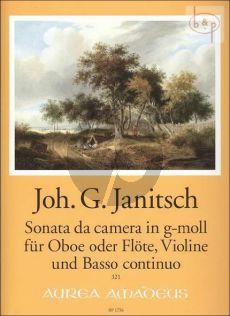 Johann Gottlieb Janitsch was born in chweidnitz, Silesia on 19 June 1708. After high school and initial musical studies in his hometown, he went to Breslau for further training, and was taught by members of the court orchestra. From 1729 on he followed his father's wishes by reading law at the University of Frankfurt/Oder, but kept up his artistic activities. Soon he enjoyed his first successes as a composer. In 1733 Janitsch accepted the post of secretary to the Prussian councillor of state F. W. von Happe. In 1736 the future King Frederick II appointed him chamber musician in the Ruppin orchestra, which moved to Rheinsberg that year. From 1740 on, he worked as 'Contraviolonist' in the court orchestra, a position he held up to his death around 1763. His 28 extant Quadros with Basso continuo feature a great diversity of most attractive tonal combinations of wind and string instruments. He himself published only three of them as op. 1 in 1760 through the Berlin publisher G. L. Winter. A large number of the remaining manuscripts quartets are kept in held in music department of the State Library of Prussia's Cultural Heritage in Berlin. Less well known are Janitsch's Trio Sonatas. The present Trio in g minor, published for the first time, is on a par with the op. 1 for beauty of sound and instrumental grandeur. Our source for the Trio is a copy of the parts kept in the Archives of the Sing-Akademie in Berlin under shelfmark SA 3440. The separate title reads: '[Incipit] / Sonata da Camera / a 3. / Oboe / Violino / e / Basso di Sigr. Janitsch / No 130.' The bass part is amply figured.